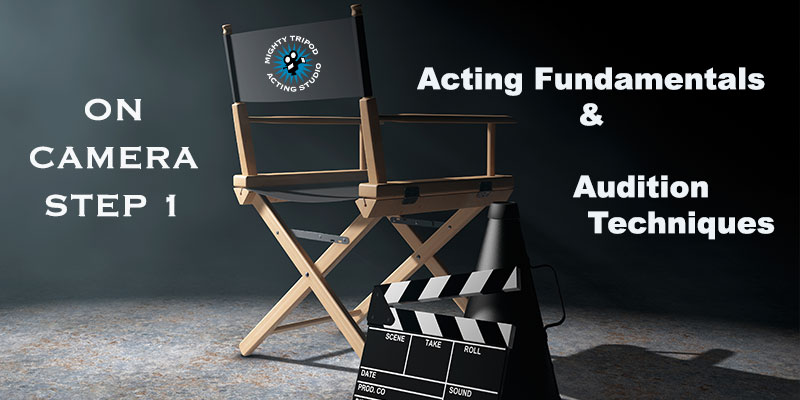 actor training from the comfort and safety of your home!

This is fundamental virtual actor training for the camera which focuses on some of the most important aspects of the industry: The Audition, The Business of the Business, & Auditioning via Zoom! Register at the bottom of this page.

In On-Camera 1, students will perform in each zoom session, receive notes and redirection from David and Angela, learn from watching others and hone their auditioning skills for commercials, film, and TV.

Week 1: Getting to know the students! Teaching: The Business of the Business – Learn about headshots, resumes, casting directors, talent agents, and more. Learn how to slate for the camera, and perform your first audition for immediate instructor feedback.
Week 2: Commercial auditioning, continued. Lesson: How to be a text detective/script analysis for minor characters (under 5 lines).
Week 3: Under 5 performances. Lesson: How to be a text detective/script analysis for supporting roles (co-stars, etc.).
Week 4: On-camera auditioning with longer scenes.
Week 5: Solo performance on-camera – The Monologue. Students will perform 2 contrasting monologues for feedback. Monologues are often used for talent agency interviews, not just for theatre, and are build into our curriculum so actors learn how to perform great solo pieces.

“I’d been working in Seattle for the past four years with some success in both theater and film, but I knew that there was more to learn that I just wasn’t getting “on the job.” Mighty Tripod’s class came recommended by Jodi Rothfield, so knew it would be a good place to start. I went in thinking I needed to brush up on my camera technique; where to look, how to stay in frame, how to play to the camera, etc. What I got was that and more: I’ve deepened my approach to acting, both for the camera and for the stage. I’ve got a new set of tools I can use to prepare more fully for auditions and roles. And, most importantly, I’ve got a new sense of confidence that’s been making a big difference in real-world casting and on-set situations. I got so much out of the first class that I went on to take the next in the series, and I plan to continue with Mighty Tripod’s ongoing classes and workshops.” – Marty Krouse

This dynamic course is for actors who are: