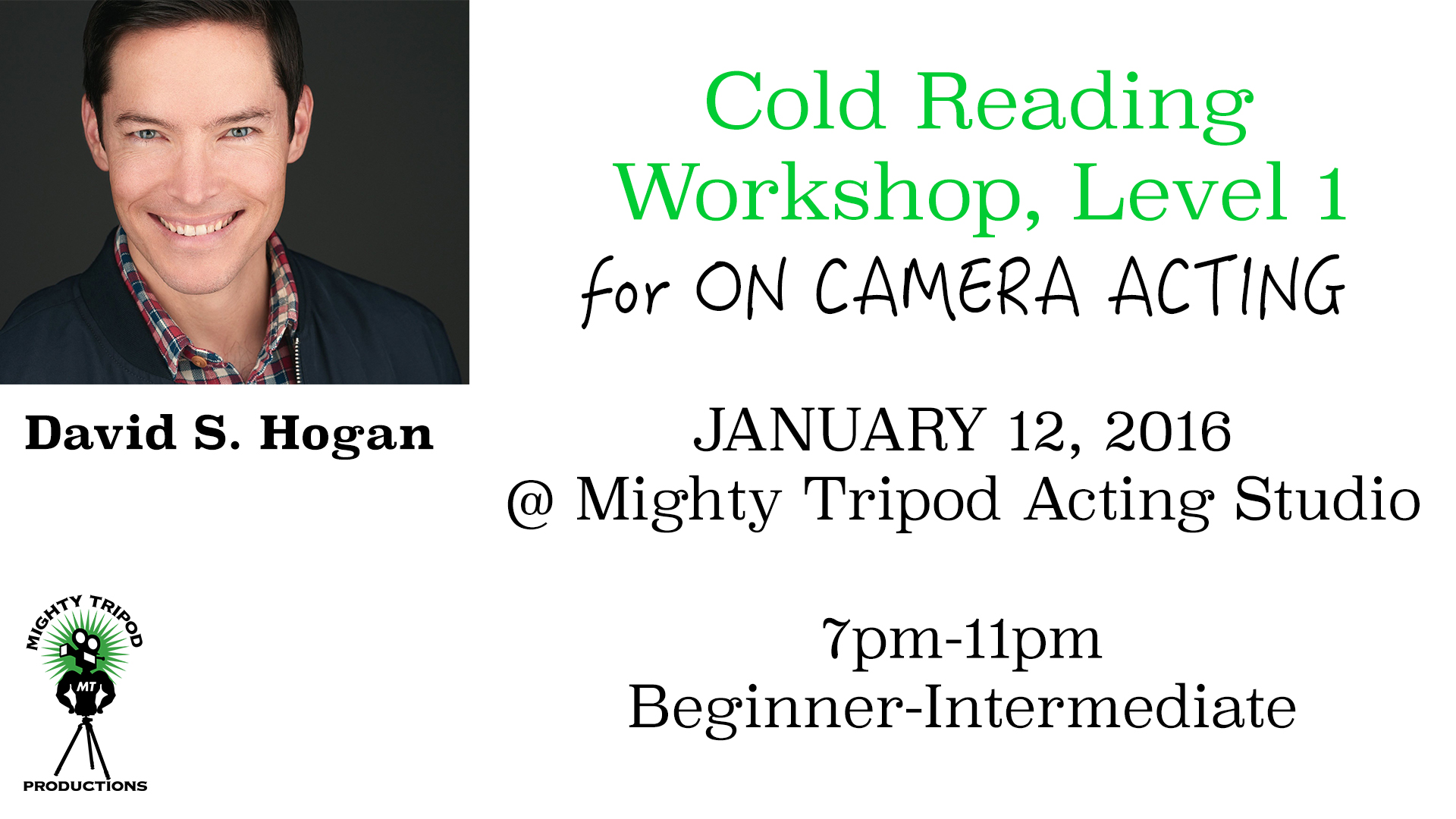 Taught by Mighty Tripod founder, David Hogan, this workshop is for Beginning-Intermediate actors who want to hone their cold reading skills and get better at auditioning. All students will get up and work in front of the camera during this workshop.*

*If you would like your work taped, please bring a Class 10 HDSC memory card to class.

Quick and smart Script Analysis is an essential skill for the actor’s tool belt. Without this skill, actors are left guessing as to how to make auditions come to life, and struggle with creating compelling characters when there is little time to prepare.

Registered Students Must:
> Email me a headshot and resume.’

[box type=”bio”]Instructor Bio: David is an actor, teacher, producer, and director. His career began in the theatre, and his work has been seen on many Seattle stages, including Book-It Repertory Theatre, Seattle Shakespeare Company, The Seattle Opera, Seattle Repertory Theatre, and more. As a stage actor, he is classically trained, and his resume’ boasts many colossal roles from Shakespeare’s canon: Mark Antony (Julius Caesar), Leontes (A Winter’s Tale), Caliban (The Tempest), Cassius (Julius Caesar), and King Henry (Henry V). His work in the theatre is celebrated, and he is a three time winner of the Seattle Times Footlight Award for Stellar Acting (2002, 2009, and 2012). He also received the 2012 Gypsy Rose Lee Award for excellence in acting. He also works steadily in front of the camera, recently wapping Paralytic, his first feature film as an actor/producer. Since pursuing on-camera work in earnest in 2011, he has booked roles in short film, feature films, commercials, corporate videos, and television. David has been working as an acting coach and professional consultant since 2012. He has studied with John Jacobsen (direct line to Uta Hagen), Tom Todoroff (direct line to Stella Adler), Jessica Marlowe Goldstein (direct line to Leonid Anisimov), Nike Imoru, Steven Anderson, and David Strasberg to name a few. Film and TV Highlights Include: Z Nation, Paralytic, The Device, The Maury Island Incident, and NBC’s GRIMM. More information about David can be found on his website and IMDb.[/box]

Early Bird price is $50 and is available for a limited time.