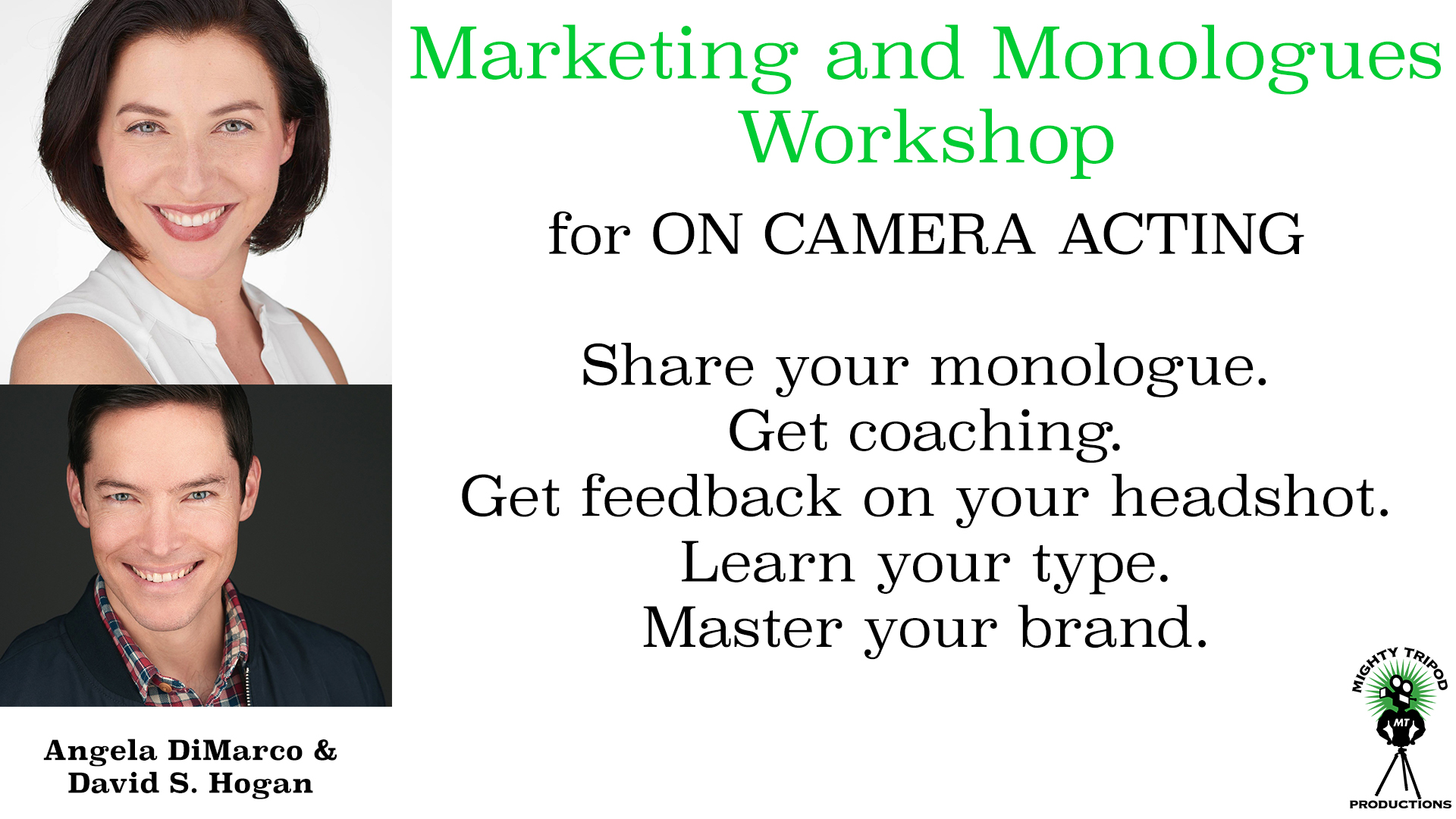 In this workshop for actors we start with monologue work, then discuss how you are being typed by the industry and how your branding efforts are working for or against you. Actors bring in a monologue and are coached, then typed by their peers and the instructors. We also type your headshot to make sure that what you are saying in your work is also reflected in your headshot.

In this Industry being an amazing actor is only half the battle. The actor also has to be very smart about her business, which includes savvy marketing practices. Thus, this workshop will be half work half lecture as we get to know you through your work, help you improve upon what you have, then discuss how to help you get your work in front of more people via representation, more auditions, and improved exposure. Social Media management will also be discussed.

These are all questions we will explore in the workshop.

This is a great workshop for actors who are looking for talent representation, are working on new material for their repertoire, are confused about typing and branding, and for those who need a friendly push towards any and all of their acting goals. Actors will leave with a polished monologue and a better understanding of how marketing and branding are at play in the business of the acting business.

Actors without headshots may also attend, but all actors must bring a memorized monologue to the workshop. If you don’t have a headshot, please bring a recent photo which looks like a headshot (head and shoulders), and enlarge the image to 8×10.

[box type=”bio”] David S. Hogan Founder, Director of Education. David is an actor, teacher, producer, and director. His career began in the theatre, and his work has been seen on many Seattle stages, including Book-It Repertory Theatre, Seattle Shakespeare Company, The Seattle Opera, Seattle Repertory Theatre, and more. As a stage actor, he is classically trained, and his resume’ boasts many colossal roles from Shakespeare’s canon: Mark Antony (Julius Caesar), Leontes (A Winter’s Tale), Caliban (The Tempest), Cassius (Julius Caesar), and King Henry (Henry V). His work in the theatre is celebrated, and he is a three time winner of the Seattle Times Footlight Award for Stellar Acting (2002, 2009, and 2012). He also received the 2012 Gypsy Rose Lee Award for excellence in acting.  He also works steadily in front of the camera, recently wapping Paralytic, his first feature film as an actor/producer. Since pursuing on-camera work in earnest in 2011, he has booked roles in short film, feature films, commercials, corporate videos, and television. David has been working as an acting coach and professional consultant since 2012. He has studied with John Jacobsen (direct line to Uta Hagen), Tom Todoroff (direct line to Stella Adler), Jessica Marlowe Goldstein (direct line to Leonid Anisimov), Nike Imoru, Steven Anderson, and David Strasberg to name a few. Film and TV Highlights Include: Z Nation, Paralytic, The Device, The Maury Island Incident, and NBC’s GRIMM.[/box]

[box type=”bio”] Angela DiMarco Founder, Director of Youth Education. Angela was born and raised in Seattle, Washington. She was cast in her first feature film, Waiting for the Light (starring Shirley MacLaine and Teri Garr), when she was ten years old. Still a student at Summit K-12 Alternative School of the Arts, she continued training and performing – in local commercials, voice-overs, and on the stage. She attended Otterbein College, where she studied in the BFA program. She then moved to Los Angeles where she competed in IMTA (International Modeling and Talent Association) and received the award for Best Comedic Performance. While is Los Angeles she met Sven Pape, who would later direct her in the horror feature film, Hollywood Kills (starring Dominic Keating). Angela began to teach and direct young actors in Los Angeles, helping them create new material for the actors to perform on stage. In 1999, she moved back to Seattle and continued to teach young actors in the Northwest. Angela has worked steadily as a stage and film actress for over 20 years. Appearing at The Seattle Repertory Theatre, Intiman Playhouse, Village Theatre, Seattle Shakespeare Company, and more, garnering praise from peers, the press, and receiving three Gregory Award Nominations: 2010-2012. Having been a child actor herself, she knows the struggles and fears that come with the territory. She hopes to share her own experiences to help the up and coming actors in the NW succeed. Recent Highlights Include: Paralytic; The Device, a NW feature film from The October People. Additionally, you can see Angela as Rosie Finkelstein in the feature Ira Finkelstein’s Christmas (starring Elliott Gould). Ira Finkelstein’s Christmas placed in the Top 10 best of SIFF 2012 (Seattle International Film Festival). Ira was also the 2012 Winner of IFFF (International Family Film Festival). In January of 2013, she was in the film, By God’s Grace with Cameron Deane Stewart.[/box]