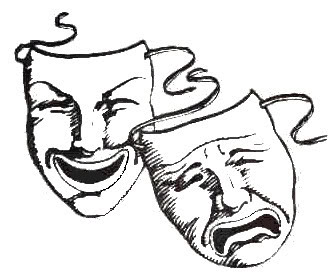 Acting has been around since the dawn of time. Right? Or, at least since Thespis. Which must be where we get the word “Thespian” from, yeah? And, please tell me, dear reader/actor, that you know what a thespian is. I am writing about the history of acting because recently, in our acting for the camera classes, I have noticed that some folks don’t know much about the history of American actor training. Which is a bit shocking, honestly. And, yes, I know, I am going waaaaaaay back by bringing up the Greeks, but in an attempt to be inclusive, I am starting from the ground floor. Now, back to Thespis…and, with a little help from Wiki: “Thespis…according to certain Ancient Greek sources and especially Aristotle, was the first person ever to appear on stage as an actor playing a character in a play (instead of speaking as him or herself). In other sources, he is said to have introduced the first principal actor in addition to the chorus.” – Source here.

If you do nothing else, dear actor, please look up and do a little research on The Group Theatre:

The Group Theatre was a New York City theatre collective formed in 1931 by Harold Clurman, Cheryl Crawford and Lee Strasberg.[1] It was intended as a base for the kind of theatre they and their colleagues believed in—a forceful, naturalistic and highly disciplined artistry. They were pioneers of what would become an “American acting technique”, derived from the teachings of Konstantin Stanislavski, but pushed beyond them as well.

Method Acting or The Method, pioneered by Lee Strasberg, is arguably the most famous and most misunderstood of all the acting techniques. And it’s one that I have had limited experience exploring. I did get the chance to attend a workshop with David Lee Strasberg (Lee’s son), but that in no way makes me an expert on the subject. What I will say is that in my years as an actor, most “actors” I know tend to assume that “Method” actors do little more than remain in character between takes and when not performing. This is, obviously, a gross misunderstanding.

To quote from Wiki:

“Strasberg’s teaching emphasized the practice of connecting to a character by drawing on personal emotions and memories, aided by a set of exercises and practices including sense memory and affective memory.”

Strasberg’s technique of having actors connect to personal emotions was controversial at the time, and remains so. Too much emphasis was placed on generating some kind of emotion at the expense of action/intention, or so said his detractors. Additionally, critics claimed that use of an actors own pain, even when used for the sake of character and storytelling, could cause psychological harm to the actor.

Stella Adler was also a member of The Group Theatre, and her teachings doubtlessly continue to influence the training of the American actor. To give you some context about what was happening back in the 1930s when all these great minds were working together, I am going to pull a quote from the Stella Adler Studio website:

“During his time with the group Lee Strasberg came up with his own acting techniques which were based on the innovative “System” of the Russian master Konstantin Stanislavski and began to instruct the members in what he called “my method of acting,” or later, “the Method.” Stella, displeased and uncomfortable with Lee’s way of working, traveled to Paris in 1938. There she met with Stanislavski, and they worked together daily for five weeks. Stella remains the only American acting teacher to have had direct contact with Stanislavski.”

Finally, let’s talk about Marlon Brando. Another heavyweight in the annals of American acting lore. Marlon Brando, in my mind, is the grandfather of naturalistic acting. If you have never watched his early film work, I suggest A Streetcar Named Desire, and On The Waterfront. Here is a quote from HotReview.org:

“The death of Marlon Brando at the age of eighty signifies the end not only of a great screen icon, but of an entire era of American realism. Brando famously broke upon the American consciousness playing Stanley Kowalski in the Broadway production of A Streetcar Named Desire in 1947. It was a stunning demonstration of naturalistic acting that left an indelible mark on everyone who saw it.”

Brando studied with both Strasberg and Adler, but, according to the Internet (Wiki): “Despite being commonly regarded as a Method actor, Brando disagreed. He claimed to have abhorred Lee Strasberg‘s teachings…”

Last but certainly not least, I must mention a few other teachers that I have come to “know” over the years as an actor for stage and screen.

Sanford Mesiner was also hanging around The Group Theatre folks, and his teaching method is considered one of the finest (from Wiki): “Meisner developed this technique after working with Lee Strasberg and Stella Adler at the Group Theatre and while working as head of the acting program at New York City‘s Neighborhood Playhouse. He continued its refinement for fifty years.”

Meisner Technique is considered a very respected actor training method, and if you are interested in kind of training in Seattle, I suggest looking into Freehold.

Anne Bogart is a founding member of SITI Company, and a heavy influence in contemporary theatre. Again, to quote Wiki, “Bogart’s influence is felt throughout the contemporary theatre: through the widespread adoption of SITI’s training methods of Viewpoints and Suzuki, her oeuvre of groundbreaking productions.”

I was introduced to Ms. Bogart’s techniques (Viewpoints and Suzuki) when I worked with Washington Ensemble Theatre, and if you have never done highly physical actor training, I recommend learning about Viewpoints and Suzuki (especially if you are an actor for the stage)

Finally, Viola Spolin (from Wiki): “was a theatre academic, educator and acting coach. She is considered an important innovator in 20th century American theater for creating directorial techniques to help actors to be focused in the present moment and to find choices improvisationally, as if in real life.[1] These acting exercises she later called Theater Games and formed the first body of work that enabled other directors and actors to create improvisational theater. Her book Improvisation for the Theater, which published these techniques, includes her philosophy and her teaching and coaching methods, and is considered the “bible of improvisational theater”.

Of course, this post does not and cannot completely cover the entire history of American actor training, nor is that the intent. My hope is that this will inspire younger actors to look back with curiosity and an eagerness to learn about the history of actor training here in the U.S.

Thanks for reading, and keep in touch!