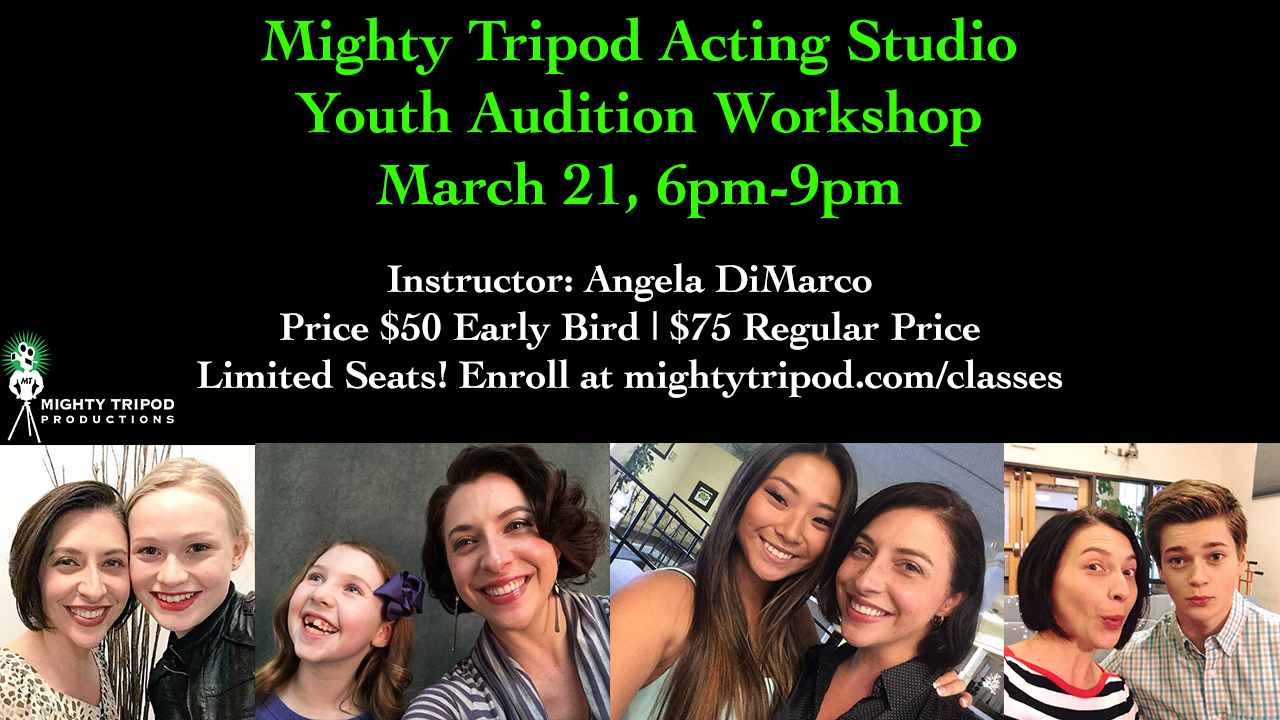 Learn to audition for film and commercials in this fun and informative workshop for actors between 6-18 years.

Register at the bottom of this page!

In this workshop, students will participate in mock auditions, working in front of the camera in a real casting environment. Students will be assigned material ahead of time to prep, but will also practice cold reading during the workshop.

Taught by Angela DiMarco, with assistance from David S. Hogan, this workshop will give you great material for your “actor tool belt,” and set you up for success at your next audition.

Parents of younger actors are welcome to stay during the workshop, or they can take a short drive into Georgetown and have a drink and a bite at Starbucks or another neighborhood spot. And, of course, since we are near the SoDo neighborhood, you can also check out Krispy Kreme if you are in the mood for a sweet treat!

If you have any questions about the workshop, simply contact us!

We look forward to working with you.

[learn_more caption=”Instructor Bio”] Angela was born and raised in Seattle, Washington. She was cast in her first feature film, Waiting for the Light (starring Shirley MacLaine and Teri Garr), when she was ten years old. Still a student at Summit K-12 Alternative School of the Arts, she continued training and performing – in local commercials, voice-overs, and on the stage. She attended Otterbein College, where she studied in the BFA program. She then moved to Los Angeles where she competed in IMTA (International Modeling and Talent Association) and received the award for Best Comedic Performance and signed with a manager. In 1999, she moved back to Seattle and began to teach young actors in the Northwest. Angela has worked steadily as a stage and film actress for over 20 years. Appearing at The Seattle Repertory Theatre, Intiman Playhouse, Village Theatre, Seattle Shakespeare Company, and more, garnering praise from peers, the press, and receiving three Gregory Award Nominations: 2010-2012. Having been a child actor herself, she knows the struggles and fears that come with the territory. She hopes to share her own experiences to help the up and coming actors in the NW succeed. Recent Highlights Include: Paralytic, The Device, and By God’s Grace. Additionally, you can see Angela as Rosie Finkelstein in the feature Ira Finkelstein’s Christmas (starring Elliott Gould). Learn more on IMDb.[/learn_more]