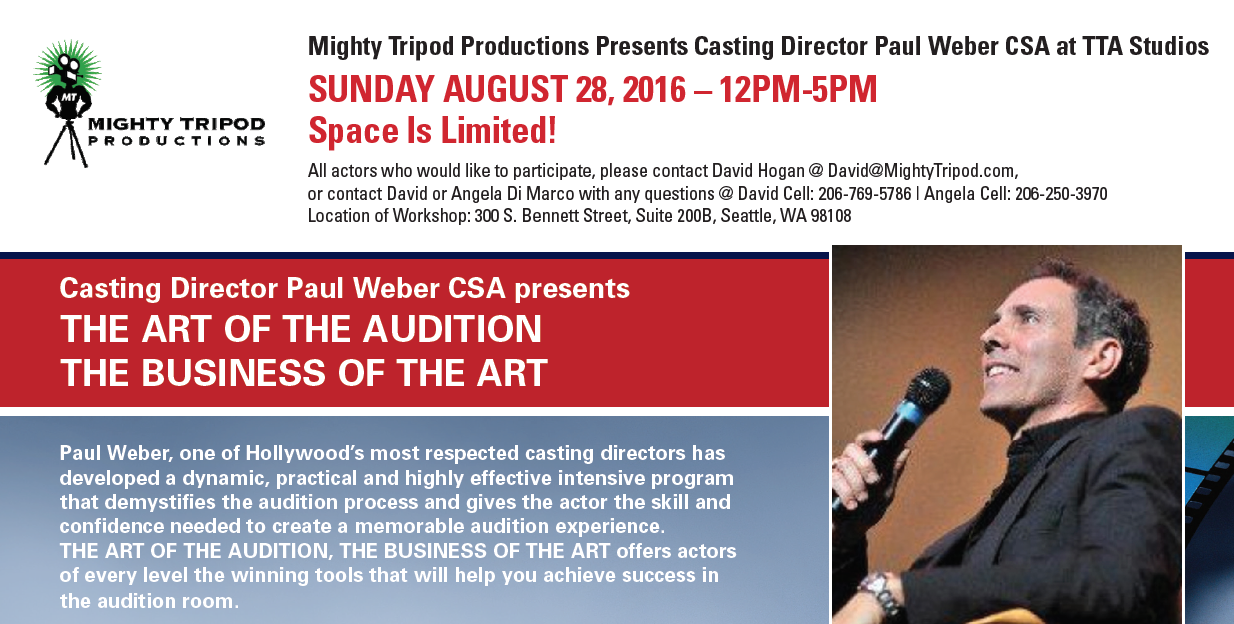 Paul Weber, one of Hollywood’s most respected casting directors has developed a dynamic, practical and highly effective intensive program that demystifies the audition process and gives the actor the skill and confidence needed to create a memorable audition experience.
THE ART OF THE AUDITION, THE BUSINESS OF THE ART offers actors of every level the winning tools that will help you achieve success in the audition room.

THE WORKSHOP: The first half of the workshop, Mr. Weber reveals:

• The Casting Perspective – What Casting professionals expect from Actors. What key elements are they looking for?
• Why Certain Actors Succeed – Mr. Weber talks about the actors he’s worked with and what makes them successful, including Johnny Depp, Ryan Reynolds, Dakota Fanning, and Reese Witherspoon.
• What You MUST Do Right Now – Jumpstart your career with these valuable tips for self-branding and marketing.
• Don’t psych yourself out before you even get in the room! Essential techniques that will empower you to stop thinking of yourself as “the victim” in the Audition Room and let the “winning performer” take the stage! • Indispensable advise on how to handle Rejection, and how to turn Anxiety and Nervousness into Excitement motivated by the joy of doing what you love to do!
• The Laws of Attraction: What you can do now to make your talent more desirable and marketable to an agent, manager or casting director and why. • The Headshots & Resumes that get noticed today – The very latest on these crucial tools – and how the digital revolution is transforming the Audition process

The second half of the workshop focuses on the actual Audition and involves actors in the process using scene work to experience and illustrate new techniques. Mr. Weber covers

• The Anatomy of the Audition – What actually happens?
• How to make the Boldest, most Effective Choices in The Room.
• The Importance of Listening, Cold Reading Technique, and Script Analysis.
• How to Deliver Your Best Read The First Time.
• Why Actors Fail – Common and avoidable mistakes that take Actors out of the picture immediately.

[learn_more caption=”Read Paul’s Bio”] ABOUT PAUL WEBER, C.S.A. Paul Weber is one of Hollywood’s most respected Casting Directors. As longtime Executive Head of Television Casting and Feature Film Consultant for MGM Studios, Weber effectively moved between both mediums with ease. For series television, Weber most notably cast the wildly popular STARGATE franchise. Other TV credits include SPARTACUS: GODS OF THE ARENA, SHE SPIES, POLTERGEIST, DEAD LIKE ME, and THE OUTER LIMITS. These series and others have garnered numerous honors including 21 Primetime Emmy Award nominations.

For the big screen, Weber has advised on numerous MGM features including the blockbuster JAMES BOND franchise, FAME, ZOOKEEPER with Kevin James, HOT TUB TIME MACHINE, RED DAWN with Chris Hemsworth, Joss Whedon’s CABIN IN THE WOODS, and ROBOCOP. Home entertainment credits include LEGALLY BLONDES, PICTURE THIS with Ashley Tisdale, INTO THE BLUE 2, WARGAMES, the SPECIES franchise, as well as the CUTTING EDGE franchise for ABC Family.

Mr. Weber is now a fully independent casting director and producer. Busier than ever, his current feature projects in development include BEULAH, starring academy award nominated actress Hailee Steinfeld and HAUNTER starring Abigail Breslin. Recent TV series include THE L.A. COMPLEX, SEED, and SAF3 on the CW network, SPARTACUS: BLOOD AND SAND for the Starz Network and a series of movies for the LIFETIME and A&E.

He is also a casting consultant for several Canadian and American production companies, studios and networks. He is currently working on projects for both STARZ and NETFLIX. Under his production banner, “One on the Way Prod”, Paul and his producing partners are engaged in developing and producing new media and independent feature projects.

For over two decades, Mr. Weber’s keen eye for talent and ability to cultivate and sustain lasting relationships within the entertainment community has made him one of the most sought-after experts in his field. As such, Mr. Weber is also frequently tapped to lead cold reading audition intensives and scene-study workshops worldwide for performers seeking invaluable practical insight that helps demystify the audition process, giving them a critical edge in an extremely competitive industry.

Closer to home, he has taught at UCLA as well as led standing-room only acting workshops at the Screen Actors Guild. Mr. Weber is a member of the Casting Society of America, the Writers Guild of America, and has served on the Host Committee for the Annual Academy Awards. A native of Connecticut, he lives in Hollywood. [/learn_more]