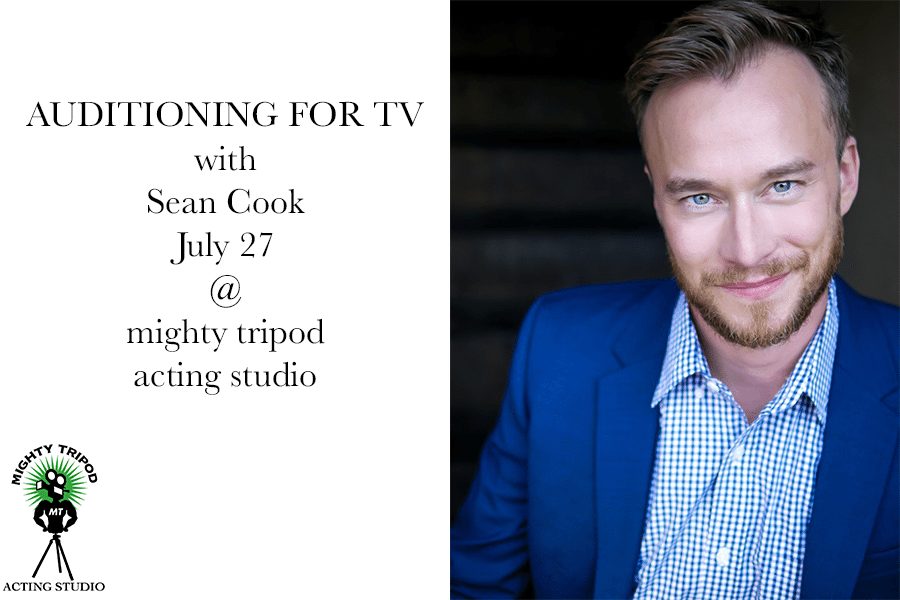 Join Sean Cook to learn how to audition for TV. Register at the bottom of this page.

EXPERIENCE: Actors should have industry experience. This workshop is for working actors.*
AGES: 18 years and up.
BRING: Your headshot & resume’.
*If you have any questions about whether this is a good workshop for you, please contact us ASAP.

Sean Cook brings 10 years of Los Angeles training and experience into the the room with him. He has trained at Upright Citizens Brigade, Lesly Kahn, Groundlings, John Rosenfeld, L.A. On-Camera Training Center, and Sam Christensen Studios. He has taught at the Sylvia Center for the Arts, Mighty Tripod Acting Studio, L.A. On-Camera Training Center, and continues to coach individual clients for auditions and on-going sessions.

Mr. Cook’s passion for acting and drama resounds impressively in his expansive background and repertoire. He is a graduate of Western Washington University and was a founding member of iDiOM Theatre in Bellingham, WA. Cook’s devotion to the stage shone brightly when he co-created a non-profit theater company, The Possibilities, in Seattle and immersed himself into the grassroots collective with his directoral debut of “The Devil and Billy Markham” by Shel Silverstein.  By 2004, Cook started appearing in roles on independent and short films. After a string of low-budget gigs, his first major film was in “John Carpenter’s The Ward”. Though the project was never a critical or commercial success, it helped Cook find a minor part in the private detective thriller “The Big Bang” opposite Antonio Banderas. These bookings have led to numerous roles in film, TV and the web including roles on NCIS L.A., Criminal Minds, Grimm and Funny or Die. Recently, he worked on Seth MacFarlane’s pilot episode of his latest series, The Orville. Look for him this year in the release of Justin Lee’s, “Any Bullet Will Do” as Lonnie Hammer.